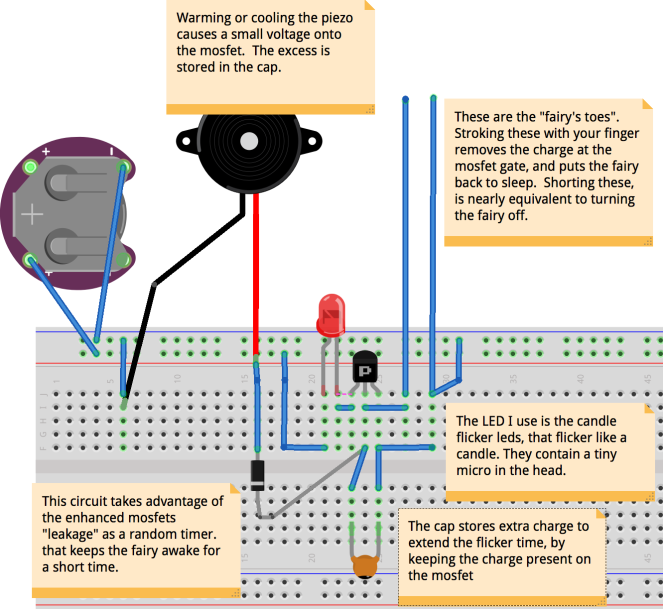 Before we begin… the Story.

The story is important, it holds ALL the magic… the circuit just seals the deal.

While holding the canister up:

Many years ago, I was walking through the woods.  It was a warm and pleasant day, a few fluffy clouds in the sky, a slight breeze. I decided to take the hike alone (leaving my boys to enjoy the campfire), it’s easier to enjoy the quiet forest noises that way.  I was just starting the return trip from a waterfall when a glint caught my eye.

Something… was shinning in a narrow beam of sunlight down at the bottom of a particularly huge tree.  Looking closer, to my fantastic surprise… I saw a fairy.  I, was, stunned.  I blinked… still there.  I shook my head, squinted, pinched myself, looked around… still there.  Sitting, right in front of me, was a fairy on a branch, dozing away.  Sleeping in broad daylight, out in the open, as if it were the most normal thing to do!

Well, that was too much, but I decided… after I stared and stared, that I should wake the little creature.  There was no way it was safe to be seen by anyone or anything that might come by.  What if a bird snapped her up in its beak!  Or someone tried to put her in a cage!  Even if she instantly disappeared, it was better than worrying about a fairie’s fate!

So, I gave its supporting branch a gentle nudge.  It stretched, yawned, blinked and slowly started to stare… at me… kinda like she wasn’t sure what she was seeing.  All of a sudden she yelped!  Stood straight up, and fell straight down… asleep… again.

That wouldn’t do… I woke her again and, after calming a bit, she told me she was quite embarrassed – she’d been seen by a dirt walker(me), she had been told she could not become a tooth fairy because she was too lazy and all of it was because she couldn’t help falling asleep.

I told her I was very sorry for her, but that laying out there on a branch was no good.  She might be eaten!  She agreed, and told me a sad tale about how she had tried everything to stay awake, and failed. Just as she finished, she fell right back asleep, and almost slipped off her branch.

Well, I couldn’t leave a fairy to be eaten!  So I picked her up, and carried her someplace safe to chat.

I learned a lot.  Turns out, fairies are fed with happy things.  Bells, laughter, happy dreams, even the warm touch of a child works .  I figured I could help… turns out I run into kids pretty often – kids just like you.  So she hides and sleeps in here.

We chatted earlier, and she is very excited to come meet all of you.  So, lets see if we can wake her… even for just a moment.

(Warm with your thumb or blow on the piezo, and the fairy flickers to life in your film canister… then falls asleep quickly.  )

Funny thing.  She actually loves to sleep.  Its her weakness, but its also something she loves more than most other things.  She even has a sleepy trigger.  If you rub her toes, the little curly bits here, she drops into sleep very quickly.  (Stroke the “toes” and the fairy falls instantly back to sleep.)

The way the circuit works. 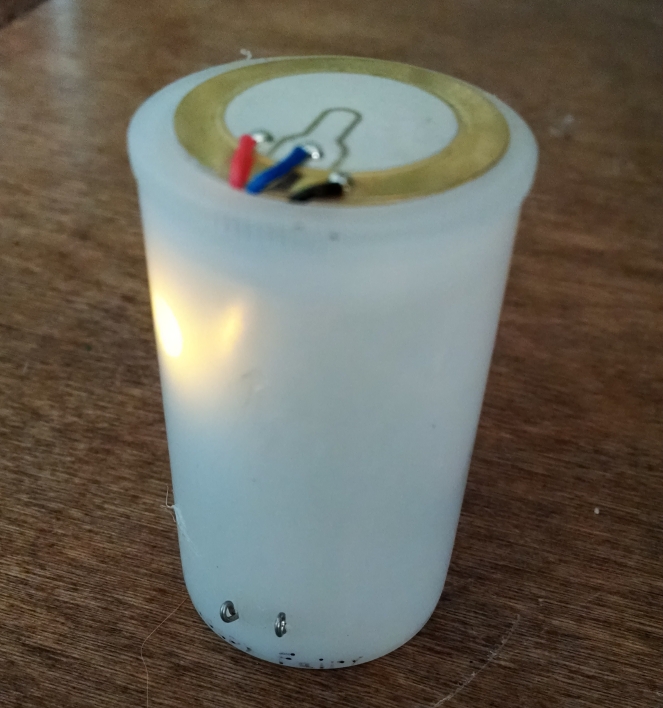 The piezo element is on the top, which allows for it to easily be “blown on” or warmed through rubbing.  Its wires are routed through a hole on the cap.

Remember, its all in the story…

Look entranced, and the kids will feel it. Have fun!

If you have any questions…

One thought on “The Sleepy Fairy – A simple project to create Fairy Magic.”

This site uses Akismet to reduce spam. Learn how your comment data is processed.

Donate Using Ripple
Help the kids with their college fund!